If i double-click on the column header to resize then display becomes correct:

But, if i close the tab (in this case “customer shipments”) and i re-open customer shipments, display is wrong again (column size is not saved) and i got the same display as first screenshot with symbols truncated.
Do you face the same problem ?

Oh, from the beginning, A refresh also helps. For example when you open an invoice and go to Payment tab and look at the Lines to Pay and Payment Lines. Refresh / Reload the form and the sign appears.

It is a known problem. @nicoe and I have already looking at it but without success.
It seems that on the first display the TreeView does not correctly divide the space of the column for the different cellrenderer (one expanded with the content and the second not expanded with the symbol). I suggested to try to trigger a second display automatically for such views as work around. @nicoe did you have time to try?

@nicoe did you have time to try?

Hopefully I should do it today.

The work around we talked about didn’t work but I had another idea during supper : I noticed that the issue is only triggered in O2M contained in notebook tabs that are not displayed on the opening of the form. Could you confirm that it’s the same setup in your case @maxx?

Thus I tested the patch for issue 10187 and indeed it worked : as the model is only set when the tab is activated the issue does not happen anymore.

So it is the display call of the xxx2Many which is not visible that makes GTK rendering wrongly the columns. I guess it should be possible to work only on this specific case.
Did you try to trigger a queue_draw when the TreeView become visible? Or to not call it if it is not visible?

The work around we talked about didn’t work but I had another idea during supper : I noticed that the issue is only triggered in O2M contained in notebook tabs that are not displayed on the opening of the form. Could you confirm that it’s the same setup in your case @maxx?

@nicoe The example screenshot is the outgoing moves in the customer shipment view (issue Issue 11214: Add volume dimensions to package - Tryton issue tracker is applied). The fields not correctly displayed are Function fields on Float Field but indeed it’s the symbol which is truncated (but it’s a M2O not a O2M).

So also an O2M into a tab that is not directly displayed.
Thank you.

I think removing the realized decorator for Affixes is a good solution, I tried detecting that the treeview has been drawn in order to trigger manually a redraw but it didn’t work.

I put a patch on the issue I tested it with icons, I would appreciate if people having the issue with text affixes would do some testing too

Thanks @nicoe but still the same problem 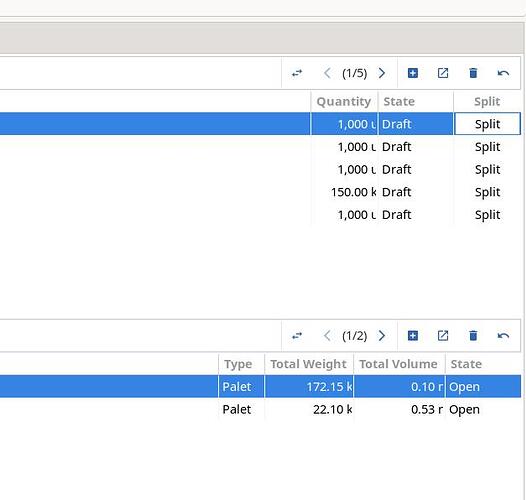 Same here, problem still exists. Just used the client and logged in into the demo and opened an posted invoice and clicked on the tab ‘payment’.

Also notice that the summation of the ‘lines to pay’ are a not there as well. After a refresh the currency symbol and the summation are displayed correctly.

It almost seems that a refresh is needed when a tab is activated.

The new version of the review have fixed that.

I applied the changes, and opened the invoice again, but still not working

This got me thinking, Yes it’s all about affix not prefix So I checked a customer shipment and it works there but in a weird sense. First when the shipment is opened the units are shown completely, but there is some margin at the right in comparison with the other tab. When you do a reload the margin becomes even bigger.