Hello, I would like to propose an improvement (if possible) for future versions of the tryton SAO.

The upgrade consists of the MENU.

I don’t know if it is possible to do this.

This is usually called an accordion menu.
I think we must be careful because such design tends to require more clicks from the user than without.
So I think we should make it smart for example it could happen only if there is a scrollbar with the current nodes expanded.
If we implement it, I think the feature should be generic for any tree view. Also I think we should define the depth level to consider a node to be in the “accordion”. For example we may want that the behavior applies only to top-level nodes so other nodes are collapsed if the user expand a new top-level node. But this could be done also for the second level.

So I think the configuration could be done in the xml like this:

What would be a level 1 and a level 2 for you? because I think the best thing would be to change the model: party, sale, purchase … 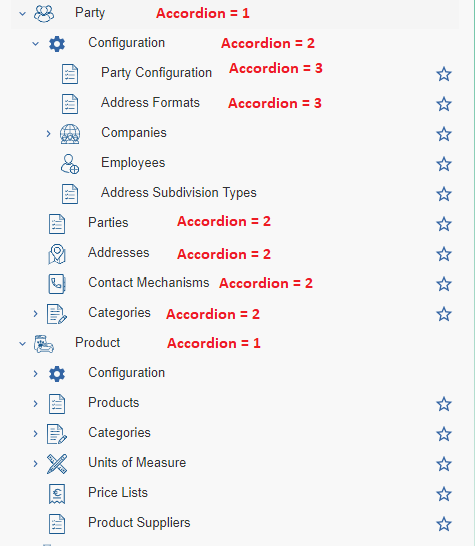 No this is the idea.

So I understand that if you have a level 2 accordion open, for example Party - Parties and you open Product - Products, this first (Party) would be hidden leaving only Product?

Yes but also with level 1. The level 2 will make that if you first expand the"Products" menu and then expand “Categories”, the “Products” will be collapsed but not if the level is 1.

Now it would only be necessary to enter this version 5.8 hehehe